American Innovation and Quality Made Locally in the UK

Starkey is an American hearing aid brand which was first established in 1967 by William Austin, originally it was a hearing repair lab. They are now the largest manufacturer of hearing aids in the US and one of the hearing aid manufacturers in Europe. While their worldwide HQ is in Minnesota, they have a local UK HQ in Stockport. They've been developing digital hearing aids since 1999. They are exceptionally well known for their custom hearing aids and they were the first to introduce the modern invisible hearing aid.

The new Livio AI hearing aid was launched on the 20th of March in London. Starkey has been talking about the device for quite a while and the description of the functionality has excited a lot of people. Many people in the hearing aid world believe that the device concept represents a huge move forward. While Starkey has not lost the focus on the core strategy of hearing better, they have introduced entirely new feature set concepts that break the mould. It will be very interesting to see what consumers make of it. Starkey says that the Livio AI represents their very best sound quality yet and they have introduced some new sound processing features to drive that. 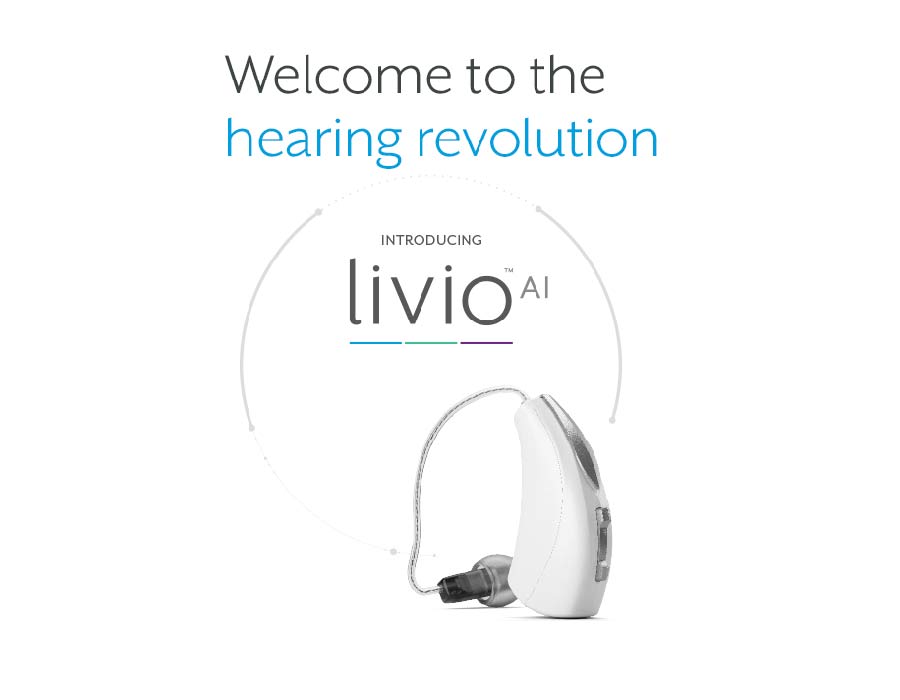 Starkey has designed a new binaural communication system in the Livio AI hearing aids which they say will produce a more natural sound. It does so by preserving the natural sound cues which will help them to drive a better experience in noisy situations. That communication allows them to preserve inter-aural level differences which will allow users to better understand where the sound is coming from. A better understanding of where sound is happening should help users to separate speech and noise in noisy situations.

Starkey says that its new Spatial Speech Enhancement system will deliver a 10% reduction in cognitive effort in noisy environments and an astonishing 80% reduction of noise. The information is a little light on this system right now, but as it becomes clearer, we will update the info.

Impact sounds such as doors slamming or cutlery or dishes clattering are quite annoying for people who wear hearing aids. Starkey has introduced a new system to handle transient or impact noises. The system identifies the sounds and reduces those noises quickly, it should translate to more comfort for the user.

The Starkey Livio AI hearing aids are Bluetooth hearing aids, audio streaming and streaming of phone calls is limited to the iPhone at present. While there was no mention of any plans to deliver Made For Android functionality, I think we can safely assume that it will happen when the new Android protocol comes into being. The new Thrive app will work with Android phones, however, if you want to get the very best out of these aids right now, you need to own an iPhone.

The features really are a little mind-blowing and they're not quite what you expect from hearing aids. Let's take a quick look at them:

Translation in 27 languages really sticks out as unique, but when you consider that older adults are exceptionally likely to travel it makes alot of sense. Starkey says that one of their core beliefs is that they enable communication. Live translation of different languages really does meet that core belief.

The Livio AI offers relatively decent health monitoring opportunities, while it monitors activity and now heart rate, it also monitors socialisation and how much time is spent engaging with people. The Thrive App uses all of this to give its scores. 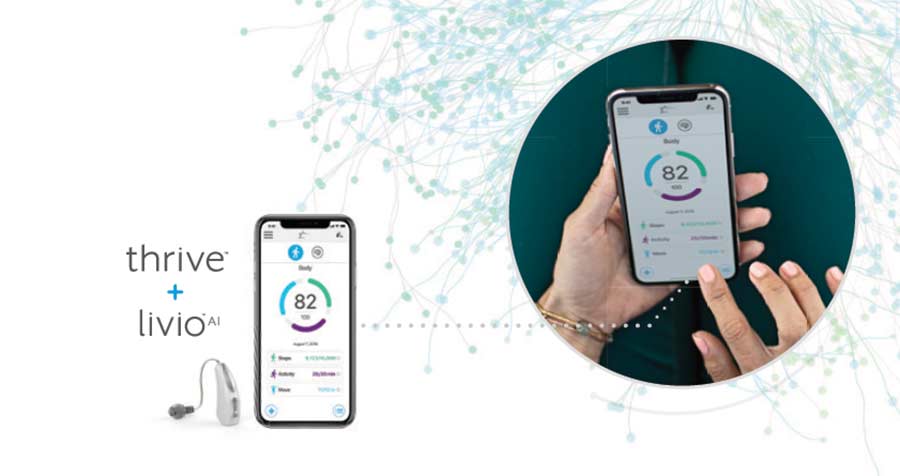 The health monitoring element of the Livio AI is offered via the Thrive App. It offers two measurements that both deliver the possibility of a score of 100 points. It focuses on a Body score and a Brain score. The body score is calculated through a combination of activity, steps and overall movement. This information is tracked daily and accessed easily in the Thrive app. As I said, a daily score of 100 points is possible.

There has of course been huge conversations around untreated hearing loss and cognitive decline over the last few years. More evidence is coming to light about the effects of untreated hearing loss and more rapid cognitive decline. The Livio AI measures the brain benefits of wearing hearing aids, the metrics used to measure the Brain score include hours of daily use, social engagement and the tracking of active listening. A daily score of 100 points is possible. While the system does not really give you a score based on your cognitive health, it does give you a clear idea about some of the things that we know promote good cognitive health.

This is a unique feature in hearing aids, Starkey is using the sensors in the Livio AI hearing aids to detect falls. They have set up a system in the Thrive App that allows an alert to go out to up to three different designated contacts. This really is an outstanding feature that helps to monitor the activity and health of older people. This feature can help older people to lead independent lives for longer.

When you consider the figures (from National Council On Aging USA) relating to falls for older people you start to understand the benefit of this feature in perspective:

Again, this is a unique feature, the hearing aids offer a self-check routine in the Thrive app. The system will run a subroutine to check the function of the hearing aids. It's a handy tool that allows you to be sure if you need to see your professional or the receiver is just blocked with wax.

You activate the Thrive Personal Assistant with a tap on the hearing aids and then simply speak your query. At present, the Thrive Personal Assistant handles queries in two ways. The AI in the app decides if your query is hearing aid related or a wider general query. If it is a hearing aid related query, (something like how do I turn the volume up), the query is handled locally within the app. If it is a wider query, like why is the sky blue?, the app passes it on to Google to answer. 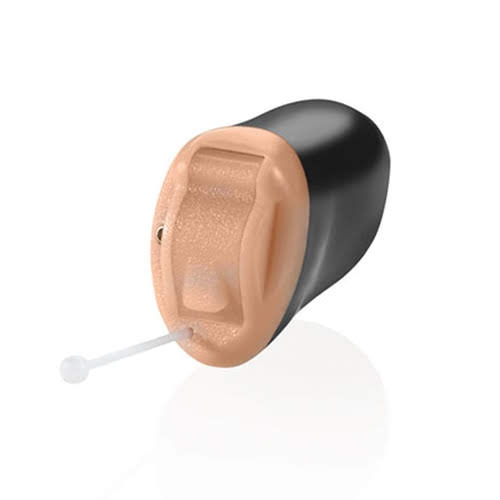 SoundLens Synergy is Starkey's most-advanced invisible hearing aids on the market. Custom fit to your exact needs and unique ear canal shape, they rest comfortably deep in your ear, so only you know they’re there. And though tiny, SoundLens Synergy come loaded with all of our leading technology. They were first and most popular custom-fit Invisible-in-the-Canal (IIC) hearing aids ever made.

When it comes to wanting the world’s smallest, most comfortable hearing aids, you can turn to SoundLens® Synergy from Starkey Hearing Technologies – now available in both wireless and non-wireless optionsAt the heart of SoundLens is Starkey’s new Synergy platform with twin compressor technology and a high-definition operating system, Acuity OS.

Connect To Your World

The wireless connectivity gives you the ability to connect to all of the devices you use every day. Connect to your mobile phone or any of the Starkey Wireless Accessory products while wearing the most discreet hearing aids available.

The Soundlens is available in three levels of technology

Wireless (invisible-in-canal) device, only available in the premium range i2400

Looking For The Latest Starkey Hearing Aids in Edinburgh, Auchterarder or Gullane? We Know We Can Help Contact Us 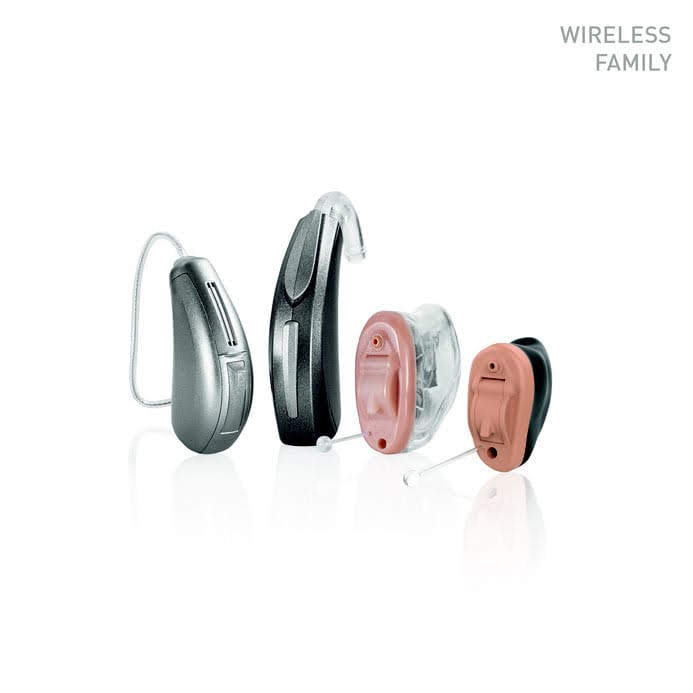 The Muse is Starkey's latest wireless hearing solution with their all new Synergy platform. Synergy is the only platform to feature quad-core twin compressor technology and the first to provide supreme precision for audibility and the ultimate optimisation for listening enjoyment. Synergy, in combination with Acuity OS, their new high-definition operating system, enables speech and sounds like music to be processed uniquely for the first time ever. Delivering advancing speech audibility and listening enjoyment of music in all environments.

Synergy also incorporates 900sync Technology, our patient preferred wireless technology, delivering a pristine audio experience that is made to aid unilateral loss with our new Muse CROS System as well as improve phone understanding with our new ear-to-ear phone streaming.

The Muse i2400 range comes in a variety of styles.

Wireless CIC (completely-in-canal) device, small, ultra discreet but powerful hearing solution with optional telecoil depending on the size of the canal (Size 10/312 battery) 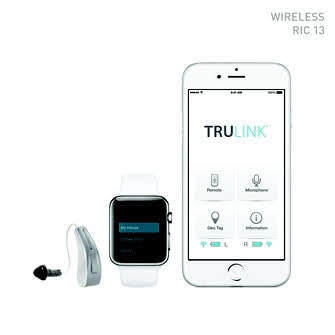 The Halo 2 is Starkey's latest wireless hearing solution with their all new Synergy platform. Synergy is the only platform to feature quad core twin compressor technology and the first to provide supreme precision for audibility and the ultimate optimisation for listening enjoyment. Synergy, in combination with Acuity OS, their new high-definition operating system, enables speech and sounds like music to be processed uniquely for the first time ever. Delivering advancing speech audibility and listening enjoyment of music in all environments. Also made for iPhone with Starkey TruLink App.

Synergy also incorporates 900sync Technology, our patient preferred wireless technology, delivering a pristine audio experience that is made to aid unilateral loss with our new Halo 2 CROS System as well as improve phone understanding with our new ear-to-ear phone streaming.

The Halo 2 is available in three levels of technology

The Halo 2 range comes in just one style.

Looking For A Hearing Test In Edinburgh, Auchterarder or Gullane?