Hearing Aids, The Right One For You

Hearing aids, all types of everything, but which is the best for you?

Maybe you've thought about getting a hearing aid, but you have some reservations, how will it look? Which is the right hearing aid for you? The only real way to find out is to come and see us so that we can explain your choices. Those choices are never clear until you have had a hearing test, however it may help to ease your concerns to know a little about the types of hearing aids available, What to look for when buying a hearing aid and how the process usually works.

First off, lets look at a few facts, hearing aids can't restore normal hearing. They will improve your hearing by amplifying soft sounds while reducing loud background noise. Modern hearing aids are mini-computers that are dedicated to processing sound. All hearing aids use similar parts to carry sounds from the environment into your ear and make those sounds clearer. Hearing aids vary a great deal in price, size, special features and the way they're placed in or on, your ear.

Hearing aids from most manufacturers usually come in four broad technology levels running from low to the highest. The introduction of new hearing aids has increased dramatically, originally hearing aid technology would have been dramatically updated every five to seven years. This has changed somewhat with dramatic updates happening every two to three years now.

There are many hearing aid manufacturers across the world. The biggest manufacturers are called the big six, they are Phonak, Starkey, Oticon, Widex, Gn Resound and Siemens. Each one of the big six provides hearing aids that cover most hearing losses with styles and options that suit most people and most losses.

Each manufacturer often has it's own niche area that it excells in. As an Independent Hearing Healthcare Practice in Edinburgh we use all of these hearing aid manufacturers, this allows us to decide what hearing aid is right for you and your hearing loss from the full range that is on offer.

How Do Hearing Aids Work

Hearing aids make sounds louder so that you can hear them better. Small microphones collect sounds from the environment. A computer chip converts the incoming sound into digital code. Then it analyzes and adjusts the sound based on your hearing loss, listening needs and the level of the sounds around you. The signals are then converted back into sound waves and delivered to your ears through speakers.

The following are common hearing aid styles, beginning with the smallest, least visible in the ear. Hearing aid manufacturers keep making smaller hearing aids to meet the demand for a hearing aid that is not very noticeable. But the smaller aids may not have the power to give you the improved hearing you expect. 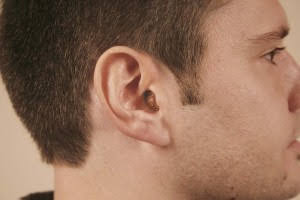 CIC hearing aids are very small, custom-made hearing aids that fit completely in your ear canal. Great cosmetically, they are suitable for mild to moderate hearing losses. As the name suggests, the hearing aid is nearly hidden in the ear canal. It is really only suitable for mild to moderate hearing loss. The CIC Is the smallest and least visible type, is less likely to pick up wind noise, uses very small batteries, which have shorter life and can be difficult to handle, doesn't contain extra features, such as volume control or a directional microphone and is susceptible to earwax clogging.

In the Canal (ITC) 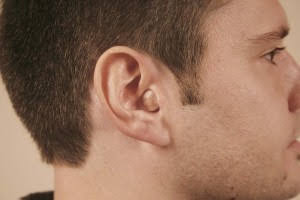 Slightly bigger than the CIC hearing aids. Due to the bigger size, it allows for more power output, therefore it is suitable for mild to moderately severe hearing losses. It has a bigger battery, which also means longer battery life. An in-the-canal hearing aid is less visible in the ear than larger styles, includes features that won't fit on completely-in-the-canal aids, but may be difficult to adjust due to its small size. It is also susceptible to earwax. 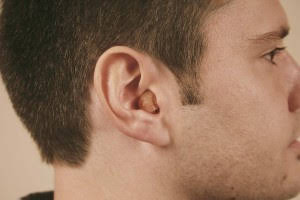 Bigger than the ITC, and easier to handle. Due to its bigger size, it is possible to have more features added to the hearing aid. An in-the-ear hearing aid can Include features such as volume control and directional microphones that are easier to adjust. They are generally easier to insert, use larger batteries, which are easier to handle and last longer. It is susceptible to earwax clogging and may pick up more wind noise than smaller devices. It is more visible in the ear than smaller devices 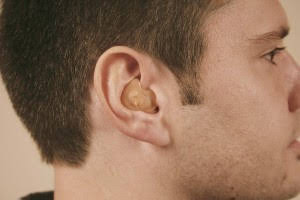 The biggest of the custom-made hearing aids. Bigger battery, which means longer battery life. Covers mild to severe hearing losses. Due to its size, it is possible to have manual features such as volume control added to it. They often include features such as volume control, tele-coil and directional microphones that are easier to adjust. They are generally easier to insert, they use larger batteries, which are easier to handle and last longer. It is susceptible to earwax clogging, may pick up more wind noise than smaller devices and is more visible in the ear than smaller devices.

Behind the Ear (BTE) & Open Fit 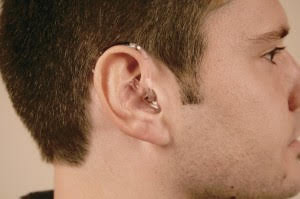 The most versatile of hearing aids, suitable for mild to profound hearing losses. Bigger batteries, which means longer battery life. Due to its size, it is easier to handle and can have many features added to it. A behind-the-ear (BTE) hearing aid hooks over the top of your ear and rests behind the ear. A tube connects the hearing aid to a custom earpiece called an earmold that fits in your ear canal. This type is appropriate for people of all ages and those with almost any type of hearing loss. A behind-the-ear hearing aid has traditionally been the largest type of hearing aid, but newer mini designs are streamlined and barely visible. They are capable of more amplification than are other styles. They may pick up more wind noise than other styles, although manufacturers use technical features to overcome this.

An open-fit hearing aid is a variation of the behind-the-ear hearing aid. This style keeps the ear canal very open, allowing for low-frequency sounds to enter the ear naturally and for high-frequency sounds to be amplified through the hearing aid. This makes the style a good choice for people with mild to profound hearing loss. The open-fit behind-the-ear style has become one of the most popular. An open-fit hearing aid Is less visible, doesn't occlude or plug up the ear like the small in-the-canal hearing aids do, making your own speech sound better to you. They can be difficult to handle due to small parts and batteries and they often lack manual adjustments due to their small size.

Receiver in the Canal (RIC) 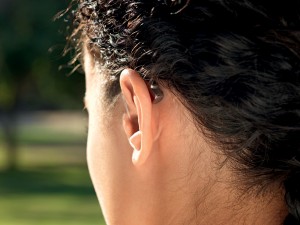 It looks like the Behind-the-ear (BTE) hearing aids, however, it has the speaker part in the ear, which improves the sound quality significantly. It is smaller and cosmetically more appealing for younger people. Covers mild to severe hearing losses. Not suitable for people who have moisture in the ears (from exercising, for example) or with wax-build-up problems. A receiver in canal hearing aid has a less visble behind the ear body and is therefore more discrete than most BTEs. It can amplify for most hearing losses no matter how severe but they can be susceptible to earwax clogging.

Getting Your Hearing Tested Will Give You The Answers

You really will not know which hearing aids are the most suitable for you until you are tested. After your hearing loss is explained to you an Audiologist can then explain your options and guide you through your decision. Size and discretion are one thing, but there are so many features available that can help with so many problem areas that you also need to consider.

You can take a look at the best hearing aid brands in the world here.

Speak To Us If You Are Worried About Hearing Loss

What Our Patients Say

This practice and all staff within are extremely professional. Katie will put you at ease the minute you sit in the chair. I have used this practice on numerous occations and came away extremely satified with the treatment i received. If you suffering with ear wax problems try them!! I guarentee you won`t be disappointed. You never know, you may even get a cuddle from POPPY!!!!!

I am an experienced hearing aid user who recently attended Edinburgh Hearing Aid Practice for assessment. The latter was the most comprehensive I have experienced to date. Audiologist Katie was meticulous in arriving at the best solution for me. She has a positive and sympathetic approach which is so important in this sensitive area.

My appointment with Katie was informative, professional and relaxed. She immediately put me at ease regarding the procedure I was about to have and advised me on the best earplugs to protect my hearing whilst playing loud music. I cannot recommend Edinburgh Hearing Practice enough. Receiving a friendly welcome from reception and a professional consultation made the whole experience worthwhile.

Looking For A Hearing Test In Edinburgh or Gullane?